The team of Unimed Poços de Caldas unit, created a panel in Libras (Brazilian Sign Language) to support the communication with Ariel, an employee who has a hearing impairment.

Site manager Isabela Colombo shares how the idea came about:

“During his orientation, Ariel told us that he had a Libras app on his cell phone. We found out that the app is actually called Hand Talk, which is a translator of words into Libras signs. This gave rise to the idea of creating a mural with the main words we use on a daily base, in order to improve the team’s communication with him and between us. So, when the team wants to form a sentence to communicate with Ariel, they just have to look at the mural and repeat the signs. And when he speaks, the team can observe, look at the mural and identify what he is referring to.”

Alphabet, greetings, identifications and the main words used in the operational unit were printed on bond paper, using sign language. The material was laminated and pasted in the storage access corridor (which is close to all areas), forming a mural that also uses colored sheet.

“Since I came to this unit, we are looking for a person with a disability to complete our team. After a long search, we conducted an interview with Ariel, and we really liked his profile. Communication with him would be our biggest obstacle, but we decided to accept the challenge, as we believe it would be a development for the entire team. Since Ariel joined, we have noticed everyone’s commitment to welcoming him and learning the signs in Libras to make everyday life lighter. We also realized that this hiring reflected in the development of our team, as the employees even took this experience to their homes. It’s been a wonderful experience!” 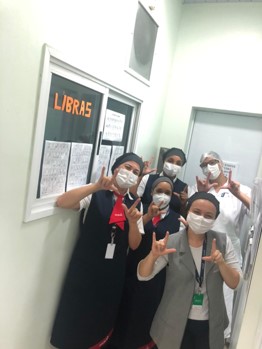